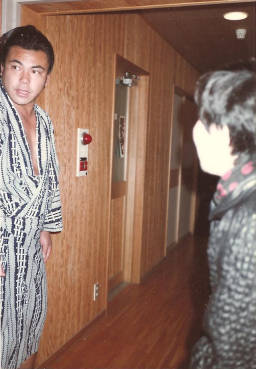 This unusual wrestler revolutionised the sport by doing weight training - he was known for being able to literally lift much heftier opponents out of the ring, some as much as twice his size! He became a champion at the age of 26 (in July 1981) and was one of the most successful sumo wrestlers ever. His explosive speed and muscular body helped him to secure victory after victory and the slightest hesitation on the part of his opponents always resulted in a loss for them. When he retired in 1991, aged 35, the sport lost one of its undisputed stars.

Like all sumo wrestlers, he lived and trained at a so called 'stable' in Tokyo and I was lucky enough to visit once, together with a group of family and friends. We were allowed to sit at the edge of the training hall and watch their morning routine, and Chiyonofuji was amazing. Despite his size, he was able to do the splits and we were fascinated to see his training methods. Afterwards, he graciously came to say hello and allowed us to take some photos. It was a day I will never forget.